RALEIGH – The State Board of Community Colleges announced recipients of the President of the Year, Excellence in Teaching, Staff of the Year and Distinguished Partners in Excellence Awards Friday, January 17.

“Through leadership, innovation and collaboration, these award recipients demonstrate a true commitment to student success,” said State Board Chair, Dr. Linwood Powell.  “Educating and training North Carolina’s workforce is at the heart of the Community College System mission, and the honorees announced today are champions of that mission.”

Dr. L. Steve Thornburg, President of Cleveland Community College (CCC) was named Wells Fargo President of the Year. The State Board of Community Colleges established the President of the Year Award in 2001, with financial support from Wells Fargo, and rewards outstanding leadership and commitment to the community college mission among the presidents of the 58 institutions of the N.C. Community College System.  During his tenure at CCC, Dr. Thornburg has championed several economic development endeavors, bringing new jobs to the area, with training provided by the college.  Dr. Thornburg has lead significant technology enhancements across the campus community, with CCC being among the first colleges to implement a smart phone application to inform students, faculty and staff of news and events on campus.  Most recently, under Dr. Thornburg’s leadership CCC, leading a consortium of community colleges and universities was awarded more than $23 million as part of the U.S. Department of Labor’s Trade Adjustment Assistance Community College and Career Training grant program.

Jennifer Brown, Biology Instructor at Robeson Community College received the R.J. Reynolds Excellence in Teaching Award.  Established in 1985 by the State Board, with financial support from R.J. Reynolds, the Excellence in Teaching Award recognizes full-time teachers who exemplify the highest standards of instruction and professionalism in the classroom and who consistently demonstrate excellence in service to their colleges and communities.  Brown prides herself on creating a student-centered classroom environment, incorporating hands-on learning resulting in students who are actively engaged in the learning process.  Past and current students frequently refer to Brown as a mentor.  In addition to classroom instruction, she is highly engaged with educational opportunities outside the classroom serving as President of the Faculty Association, a grant evaluator for NASA, as well as coordinator and facilitator of two summer camps geared toward STEM careers.

Ed Bowling, Executive Director, Completion by Design at Guilford Technical Community College (GTCC) is the BB&T Staff of the Year Award recipient. With financial support from BB&T, the State Board established the award in 2001 to recognize excellent performance and commitment to the community college mission by the non-teaching staff of the 58 institutions of the North Carolina Community College System and the System Office.  In his current role of Executive Director of the Completion by Design initiative, Bowling is working with five additional North Carolina community colleges and the System Office to pilot and scale-up efforts to increase completion rates among young, low-income students by identifying and mitigating barriers to success and providing increased avenues for access to education and training.  This role is unique in that it requires system-wide coordination, as well as engagement with national partners, such as the Bill and Melinda Gates Foundation with results of this initiative impacting students across the state.

Currituck County and College of The Albemarle (COA) were named Distinguished Partners in Excellence.  Established in 2005, this State Board award honors an exemplary employer, business or industry group that has demonstrated decisive involvement and a firm commitment to the professional development of its employees and/or to the development of North Carolina's workforce through its partnership efforts with one or more of the 58 community colleges.  Currituck County and COA established a partnership in 2011 that has resulted in the Regional Aviation and Technical Training Center, a 42,000 square-foot facility that trains students in aviation technology, computer integrated machining and architectural technology.  The state-of-the-art facility is the first of its kind in the nation and through the support of Currituck County and the stewardship of the college, the training center provides education and training opportunities to multiple counties in the area, and supports the state’s growing aviation industry.

One new State Board member received the oath of office.  J. Wesley Fricks III of Raleigh is an appointee of the Governor and was formally sworn in by N.C. Supreme Court Justice Paul Newby.  Fricks is Associate Vice President of Grandbridge Real Estate Capital, a subsidiary of BB&T. 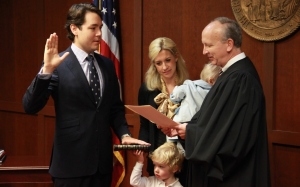 Wesley Fricks of Raleigh, NC being sworn in by Justice Paul Newby.