In January of 2011, I attended a women's conference that was hosted by a local church in town. When the Guest Speaker described the different places she had traveled to, I was shown images of people who looked different than me. Although they spoke a different language than I did, they still had no voice. This encounter sparked something in me - that maybe one day, I could communicate with them in their culture, in their language and together we could be heard. From this moment forward, I was determined to seek an education in International Studies and Linguistics.

I am currently a full-time student at Coastal Carolina Community College, due to graduate with my Associate of Arts degree in May 2014. After graduation, my next set goal is to transfer to Duke University and work towards a Bachelor's degree. My long-term goal is to earn a Ph.D. in Women's Studies and work on Foreign Policy, especially as it pertains to women in the Middle East, among other areas of the world.

Since the time of that women's conference, the major tool in my life that has developed my goals, as well as myself, even further has been my experience at the community college. While at Coastal, I have had the privilege of being taught by professors who not only acted as academic teachers, but as mentors. I have also been presented with the opportunities to develop my skills as a leader. In addition to being a mother and working two jobs, I serve as the Vice President of the Phi Theta kappa National Honor Society chapter. Through this organization, as well as participation in the Student Government Association, I have been able to give back not only to my school, but to my community through community service. Furthermore, while at CCCC, I have participated in the Social Sciences Club and the LGBTQIA organization on campus. I have found that connecting with campus life and the community as much as possible can act as a major contribution to a person's experience in general, ad their academic excellence.

Back in 2011, before I began at Coastal, my goals seemed too big to become real. However, now facing three months until graduation and my first college degree, success has never felt more real to me. The experience and education, both in academics and in life that I have obtained while being a student at the college has provided me with a stepping stone to move on to the next level. I hope that one day the images I once saw as a teenage girl at a women's conference will not just be on screen, but will be seen with my eyes, felt by my hands and changed by my mind. 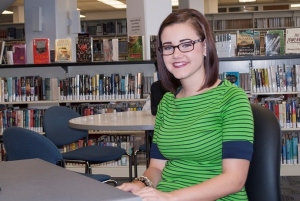