After five years in the U.S. Navy, Ari Saint-Lot relocated to North Carolina and was looking for a new career, but wanted more than just a "regular" job. After two years at Cape Fear Community College, he got it.

A friend recommended that Saint-Lot look into the unique marine technology training offered at Cape Fear Community College and in a few months he and his wife moved to Wilmington, NC so he could enroll at CFCC.

It turned out to be a great decision. After two years at CFCC, Saint-Lot earned his degree and soon landed a job with CGG Veritas, an international company that provides a wide range of offshore services for the oil and gas industry. He spends five weeks at sea and then returns back home to North Carolina for five weeks off.

“The marine tech program prepared me for my current job,” Saint-Lot said. He explained that the hands-on experience he gained at CFCC helped him land a job with one of the world's leading offshore seismic research companies.

Designed to train students to work in a wide variety of marine-related fields, the marine technology program at CFCC is one of the most unique educational programs offered at any college in the country.

Throughout the five-semester program, students take courses in marine biology, navigation, oceanography, marine instrumentation and electronics, hydrographic surveying and water analysis. Students work in all types of marine and coastal environments. They work in the Cape Fear River, in the marshes, and in the intracoastal waterway.

However, the crown jewel of the program's training is the offshore experience students get on the Atlantic Ocean. Over the course of two years, every student in the program spends a total of 32 days on board the college's ocean-going research vessel, the R/V Cape Hatteras.

"When students apply what they've learned in the classroom out on the open water miles away from the sight of land, it all comes together," Jason Rogers, CFCC's marine technology department chairman. said.

"The at-sea experience can't be taught in a classroom or simulated on a lake or river. Students have to learn how to physically and mentally adapt to the ocean environment and be able to do their job safely. Employers hire our graduates because they'll be able to go right to work," Rogers said.

According to the most recent graduate employment survey, 94% of CFCC's marine technology graduates were employed within one year of graduation. The average salary of those working was $48,000 per year. 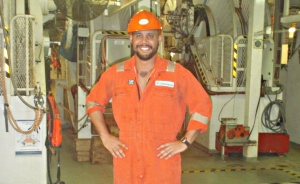