Brenda Lopez Benitez is the personification of Dr. Dallas Herring’s philosophy of “taking people where they are and carrying them as far as they can go.” Brenda is the ninth of eleven children and was born in Mexico, the daughter of a migrant farm worker.

Although her older brothers were not able to attend high school because they had to help support the family, Brenda was a good student, winning academic awards while in elementary school. Her older brothers came to the U.S. as farm workers in 1996.

Brenda was about to start sixth grade when her mother decided to reunite with the rest of her children and migrate to the U.S. “I didn’t know a word of English. I was not able to understand my teachers, and that made me really sad because I was used to doing well in school,” said Brenda. But she was determined, and, by her freshman year in high school, she was fluent in English.

Brenda said she had not thought about college. “I didn’t know that people went to college because nobody in my family had ever gone to college here or in Mexico,” she said. During her senior year, she enrolled in Dual Enrollment classes at Randolph Community College and it sparked her interest.

But when she talked to a counselor, she was told that, to obtain financial aid, she needed legal status. “My dreams of attending college were crushed...I had never considered the fact that we had entered the United States illegally.” Brenda found help with her plight through a Randolph County school system advocate and a representative in Congressman Howard Coble’s office. They encouraged her to apply for legal status for herself, her mother, and her little sister. In February 2007, Brenda received her permanent residency.

Brenda enrolled in the College Transfer program at RCC, where she was a member of Phi Theta Kappa and an Ambassador. She graduated with her Associate in Arts degree in May 2009 and transferred to the University of North Carolina at Chapel Hill.  Brenda is now enrolled at the UNC School of Dentistry – Class of 2015.

“Attending RCC was the best decision I could have ever made regarding my college career,” said Brenda. “At RCC, I was used to working harder than I did in high school, and I had more discipline than most students who come (to UNC) straight from high school.”

Brenda’s long-term goal is to work at a public dental clinic that offers care to low-income communities in North Carolina.

She said that many things motivate her, but her family is her number one incentive. “Becoming the first member of my family to attend college is probably the best gift I could have ever given to my family,” she said. “I set an example for my younger sisters and future generations to come.” 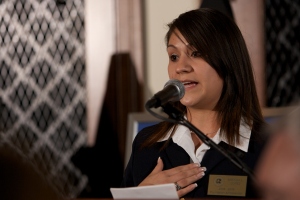