To Brian Pham, one meaning of freedom is being able to pursue a good education. Pham, who was born in Vietnam and came to the United States in 1998 with his parents and sister. He is the 2013 North Carolina Community College System's Dallas Herring Award recipient.

The North Carolina Community College System established the Dallas Herring Achievement Award in 2010 to honor the late Dr. Dallas Herring, one of the state's earliest advocates of community colleges. The award is bestowed annually upon a current or former student who best embodies Dr. Herring's philosophy of "taking people where they are and carrying them as far as they can go."

In order to understand what Brian Pham has accomplished at Mayland Community College, a look at his past is important. In 1989, at the age of 12, his father woke him up in the middle of the night and had him say goodbye to his mother and sisters. At the time, Pham was living in Vietnam and the communist government strictly controlled travel. He and his father spent three days walking through the jungle to avoid being caught. His father bribed a man with a rice boat and he and several others hid in a compartment and eventually made it to an island off the coast of Malaysia.

For the next seven years, he and his father were in a series of UN refugee camps waiting to come to the United States because his father wanted a better life for his son. Eventually through a series of miraculous events, they received word they would all be allowed to come to the U.S. They were also informed the rest of their family could leave Vietnam as well. Because of the bureaucracy, they arrived in Atlanta almost 10 years to the day after leaving Vietnam.

Pham and his family arrived in Atlanta with almost nothing and speaking only broken English. As the oldest child, Brian took a job in warehouse to help support his family and helped pay for his younger sister to go to college and get her degree. Pham never lost hope that he would be able to attend college. His dream became a reality when he enrolled at Mayland Community College in January of 2011.

“I really was not sure how he would do,” said Shook. “He had been informally taught by his father in the refugee camp. I thought attending school would be difficult for him. What I discovered was someone who wanted an education and loved to learn. He was the student every instructor dreams of having in their class.”

“Brian is the extraordinary student I have ever had in class,” said Shook. “In 24 years of teaching, I have never seen Brian's equal in ability, work ethic and absolute joy in learning. As I worked with Brian, he demonstrated a superior understanding and mathematical maturity in his growing knowledge of abstract concepts that is on par with students in advanced graduate programs.”

Additionally, Pham showed an intellectual curiosity that went beyond wanting to obtain a “good grade.” His desire to understand mathematics in a deeper and more meaningful way was demonstrated in his joy in doing upper-level mathematics, utilizing an amazing depth of understanding and relating calculus concepts in his physics courses.

“When I talked with the faculty in English and history, they all told similar stories of what Brian had accomplished,” said Shook. “His hard work and love of learning allowed him to overcome any deficit and he quickly became the most outstanding student in all of his classes.”

In addition to being a first rate student in all subjects, Pham also exemplifies good character by showing respect to both faculty and his fellow students. Although Pham has a family of his own, he volunteered time tutoring in the math lab and helped faculty as they worked with students in self-paced developmental math modules.

“Brian is patient with the developmental students and constantly encouraged the students around him to work hard and give their best efforts in getting their education,” said Shook. “I see in Brian someone who has a mindset of service to the community and the world around him.”

Pham speaks very highly of the education he received while enrolled at Mayland Community College. When the time comes, he wants his children to attend a community college before going to a four-year institution. Pham said he learned more than just the basics while attending classes at Mayland. His confidence also increased, and is ready for the next step in his educational journey at Appalachian State University where he is majoring in finance/actuarial sciences.

“Mayland has been a wonderful experience,” said Pham. “I learned a lot from my instructors and now encourage people to enroll at Mayland.”

According to Pham, his father told him as he was hidden in a rice boat leaving Vietnam, “the government may take all of your possessions but they can never take away your education.” 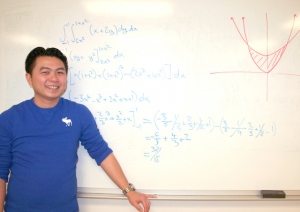