Brooke Bissette will graduate this May with an Associate’s Degree in Historic Preservation Trades from Edgecombe Community College.  She grew up in Wilson, NC where she now lives and works as the Children and Youth Coordinator for First Christian Church.  Prior to attending ECC, Brooke lived in Wilmington and worked as a rental manager for Figure Eight Realty, a firm specializing in the sales and rental of vacation homes.  She received her Broker’s license in 2006, but two years later decided it was time for a career change.

After many unsuccessful attempts at finding a new career, holding several part-time retail jobs and serving as a substitute teacher, she started looking at her interests in architecture and design.  Through this she discovered a passion for saving historic homes and buildings.  In January of 2010, she briefly met with Monika Fleming, the head of ECC’s new Historic Preservation Trades program, and the next day she enrolled as a full-time student.

Brooke plans to eventually own a company which consults on rehabilitation projects.  She intends to focus on making alterations to existing buildings that are sensitive to historic architecture, the environment, and the end users.  Her education at ECC provided her with an understanding of the technical processes, administrative procedures and sustainable methods that will make this possible.  Her first project will be moving and rehabilitating the historic Mayor John Wilson home to a new location where she and her fiancée will live after their marriage. 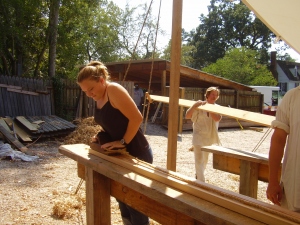