My name is Casey and I am honored to represent Halifax Community College. Because I was raised to be a humble and simple person something of this degree is quite extravagant. Nevertheless, I would like to share a little about myself, how I achieved my academic goals, and give respect where I feel it is due.

I was born and raised in Roanoke Rapids by a modest family who sought to teach me that it was possible to be happy outside the clutches of materialistic charm. In other words, I came from a working class family that made ends meet the best way possible. During my childhood, I feel I was blessed to see the world for what it was and not through some sort of rose colored glasses as it helped me to establish a down to earth and honest personality.

While I do not blame the rational way I was raised, I do feel it had an affect on my personal views regarding a higher education. It’s not that I did not like learning about new concepts, I just felt like I needed a job in order to support myself. So in the winter of nineteen ninety nine, during my junior year, I quit high school and began babysitting, cleaning houses, and doing what ever I could to earn a living.

It wasn’t until the summer of two thousand that, with the help of my best friend, I landed what I then called a “proper” job at the local Sonic Drive In. Because she and I were just about attached at the hip, it was also with her that I earned my G.E.D. in a matter of two weeks. Although my family was relieved that I made up for my high school drop out status, I felt like it was just something to pass the time.

Throughout the next few years I never really thought about returning to school as I made a decent living at the Sonic. I met my soul mate, took some time off work, and sort of buried myself inside the belly of the real world. But, as time moved on and the economy worsened, I decided that maybe I should attempt to take some classes as I did not want to work at a hamburger stand the rest of my life.

Three times I made a small attempt to come to HCC. Each time something would always arise to keep me from following through with my attempt. Finally, in two thousand seven I became determined to return to school and succeed no matter what the heavens threw at me. Now that I think about it, maybe I should have been a little less head strong as the heavens surely threw some complicated obstacles into my path.

During the time I have been enrolled at HCC, I have also witnessed the passing of many family members and friends that fueled my inspiration and sanity. Plus, because I chose to earn a degree rather than move up in the company I work for, I lost many of my hours which made getting back and forth not to mention surviving a real hassle. As any student knows when pressed for money, we can be rather resilient. What we don’t ask our parents and family for we find ways to compensate. Therefore, instead of lying down and facing defeat, I held my head high, purchased a scooter that gets a hundred miles to the gallon, and continued to earn an education. Yes, I ride a scooter to work and school everyday, and live 20 miles from the college and my job.

Although I may be wind blown and have helmet hair, I have a 4.0 grade point average. With the support of my family, friends, and instructors; I have both an Associate in Arts and an Associate in Science Degree with the hopes of continuing my education in the very near future.

Often times, fast food restaurant managers build their own ego by downing that of others. And it doesn’t help that I am succeeding in school because it threatens them, sadly. On the other hand, Halifax Community College has helped me improve my self esteem, allowed me to realize that anything is possible, and made me feel worth more than my job puts me off to be.

With this said, I think the main point of my story is that no matter what mind frame you have or struggles that may present themselves, it is possible to get where you want to be in the future.

In order to help you understand Casey Baird, I will leave you with a simple poem by poet William (Arthur Edgar) O’Shaughnessy. “We are the music makers, we are the dreamers of dreams, wandering by lone sea-breakers and sitting by desolate streams- world losers and world forsakers, on whom the pale moon gleams; yet we are the movers and shakers of the world forever, it seems.” 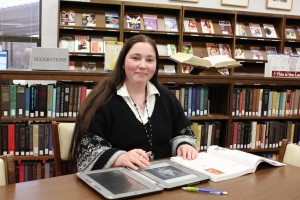