On 4 August 2002 I left the only home I had ever known, in a small farming community in rural Kansas, to join the United States Marine Corps. I arrived in San Diego, CA and began my journey toward earning the title of Marine. In February 2003, only two weeks after completing the final stage of my entry level training, I was put on a plane to Kuwait to prepare for the upcoming invasion of Iraq. Throughout my six years in the Marine Corps I did three combat tours in Iraq and spent my final year and a half training Marines to deploy to instruct the Iraqi and Afghanistan military and police. During my three combat tours I not only participated in the initial invasion, but I also participated in the major operations in 2004 and 2005. I am now a disabled veteran; I suffer from Post-Traumatic Stress Disorder, Traumatic Brain Injury, as well as several musculoskeletal problems from multiple Improvised Explosive Devices. Once I was no longer physically capable of being a Marine I didn’t know what I would do with my life. When I first transitioned back to civilian life I worked a few different dead end jobs, then I found my calling. I am currently working for the Department of Veterans Affairs helping to serve other disabled veterans and their families.

When the idea to pursue a college education first took hold, I was terrified that I would not be able to deal with the crowds and the packed class rooms. Once I finally gained the courage to really look into schools, Forsyth Tech was a stand out for me because of the close proximity and the wide range of programs available. When I applied for acceptance to Forsyth Tech I was amazed at how simple the process was and how helpful the staff was, I immediately felt welcome and at home. My first class was Psychology, and I remember what a relief it was to see that there were only twenty other students in the class room. From that point on, I correlate my success to the close knit community feel that Forsyth Tech has so graciously provided me. I have found that every professor I have had the pleasure of learning from pushes the philosophy that if I put forth the effort there is nothing I cannot learn. It is not to say that I have not struggled to grasp many of the concepts that have been presented to me, but I have tested those professors philosophy and believe it or not, it works.

Today I am a full time employee, a full time student and most importantly a full time husband and father. Without the opportunities that Forsyth Tech has offered me I truly believe that a college education would have been out of my reach. Community colleges as a whole offer students from all walks of life the opportunity to pursue a better education and a better life, without these institutions the American Dream would not be possible to a large portion of the population. It has been my experience that the Community College system inspires a passion for learning and has made me feel confident in my endeavor to continue my education all the way to a Graduate degree. For myself I believe that going straight to a University would have been far too overwhelming and my confidence to push on and complete my education would have deteriorated.  I am thankful for the privilege to better myself at a place like Forsyth Tech. 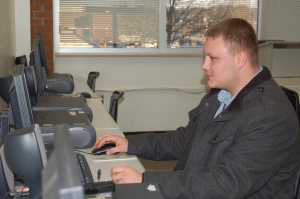