When Courtney Carawan was a student at Gates County High School, she took a few early childhood education classes during her junior and senior year which gave her a chance to interact with the students at her local elementary school.

Her work with those young students was so rewarding, she said, it helped Carawan realize what she wanted to pursue after graduation.

“The profession was just really intriguing to me, based on the kids,” said the 24-year-old Carawan, who graduated from College of The Albemarle in 2011 with her Associate’s Degree in Early Childhood Education. “I liked seeing the kids grow and learn new things.”

Watching children develop – and helping them learn the early development skills they need to be successful once they start school – has been Carawan’s focus for the past three years. After graduating from COA, Carawan landed a job as a lead preschool teacher with The Children’s Center, a child care organization in Western Tidewater Virginia that serves over 1,300 children through its Early Head Start, Head Start, Early Intervention and Community Childcare programs. There, Carawan has worked with the 16 to 24-month-old children, the pre-K students and most recently as the organization’s Early Head Start, EHS, lead teacher.

“I was in that position from September 2013 to just recently,” Carawan said, adding that in April she was promoted to Site Supervisor for the organization’s Pruden Center program in Suffolk. The Pruden Center oversees the program’s EHS program and is one of eight buildings operated by The Children’s Center.

In her new role, Carawan will be responsible for managing the EHS program and its 22 students, five teachers and two classrooms.

“The Site Supervisor is the person people look to for leadership in the building,” said Jeff Zeigler, community relations coordinator for The Children’s Center. “She’s really high-energy and creative and she does a great job with the children.”

As a student in COA’s Early Childhood Education program Carawan spent about three months observing teachers in the classroom of a local elementary school, watching them interact with their students. During that time, Carawan learned a lot about her future profession, but the most important lesson she walked away with was how to relate to her young students.

“I feel like COA’s courses helped me get where I am today,” Carawan said. “The instructors gave you a better idea of what the field was going to be like – more than just the textbooks – but by their experiences as well.”

“Every child is different,” Carawan added. “I learned that what you do in the classroom, as far as the interaction with the kids, is probably more important than sit-down structure. Sitting them down to try to teach them is pretty unrealistic.”

For example, Carawan said, for preschoolers learning about butterflies, creating a small science center in the classroom where students can observe butterflies and talk about what they notice or see, versus telling them the different facts about butterflies, makes a big difference in how they learn.

Since becoming a teacher at The Children’s Center, Carawan’s focus has been introducing structure to her preschoolers and helping them learn the skills they need to be successful once they start school. As she transitions to her new role as supervisor of the organization’s EHS program, she looks forward to having a leadership role to help accomplish this.

“Our Center is focused on their school-readiness, their gross-motor skills and vocabulary which they learn about through play,” Carawan said. “I do feel like this leadership role is going to help me do more for the kids.” 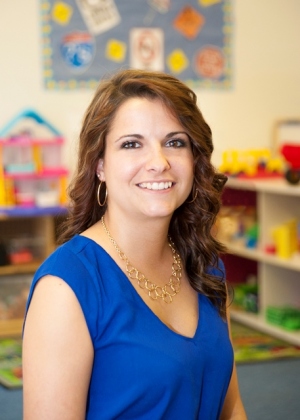