Donald McCoy graduated from his Elizabeth City high school four decades ago, but can still easily recall that warm June evening like it was yesterday.

Up until then, McCoy had been preforming throughout Northeast North Carolina and South Hampton Roads with his band – playing jazz and blues gigs throughout the area. The band was pretty popular and McCoy figured he would continue playing fulltime after graduating high school. But, that night as he and his bandmates talked about their futures, he realized he was the only one who wasn’t headed off to college in the fall.

Looking back on it, McCoy said, he recalled his mom telling him repeatedly his senior year that he needed to plan for his future.

“She’d said it before, but this night, I hear it,” McCoy said. “She said, ‘You’re not going to lie around here.’ And I thought, I need to get my act together.”

His best friend’s dad was nearby and offered some advice, suggesting McCoy enroll at College of The Albemarle that fall because no SAT scores were required, or prerequisite classes. He also suggested that since McCoy had a knack for tinkering – often fixing the band’s amplifiers and other equipment – he enroll in COA’s electronics program.

McCoy did just that and in 1976, the former high school musician graduated from COA with his Associate’s of Applied Science degree in Electronic Technology.  McCoy was tempted to stop his education there and work full-time at a nearby electronics company in Elizabeth City where he had worked a few summers, but Dave Hodges, the former dean of the Electronic Technology program at COA – and a mentor to McCoy – intervened.

He urged McCoy to pursue his Bachelor’s of Science in Engineering Technology. Three years later, in December 1979, McCoy graduated with the degree from Old Dominion University in Norfolk, Va.

He took a job with the international computer hardware company, IBM Corporation and remained there for the next 30 years.

The job provided him the opportunity to travel to 16 countries  – including Russia, China, Germany, France and The Netherlands –  as he handled assignments for IBM’s corporate headquarters. It also sent him abroad to England in 1983, where he lived for two years as he helped design a new hard drive for IBM, to sell in the United States.

“Our voltage is different in the United States,” McCoy said. “So everyone had to customize the product for their location.”

McCoy enjoyed his time living in the rural countryside of Hursley and Havant, England where IBM had two offices. London was just over an hour away, so he would often head there with friends on weekends to learn about British culture – visiting London theatres and going to the city’s museums.

Likewise, almost monthly, he would host American Nights at his home, teaching his British friends about American life by watching American movies and eating uniquely American food like sloppy joes and hamburgers.

McCoy remembers those years in England fondly and 30 years later, he is still in touch with a number of friends he made while living there.

In addition to his work as an electrical engineer for IBM, helping create hardware products, McCoy also did competitive analysis for the company, looking at other companies hardware and taking it apart to determine how they made their product and estimating whether IBM could make something similar that was cheaper, but of better quality. He also worked at IBM as a quality engineer, assisting the company’s million-dollar customers who were experiencing problems to investigate the cause and solve the issue.

“Most of those jobs led up to 1999,” McCoy said, adding that that year, he transitioned from the engineering production side of things, to an outreach position with the company, reaching out to schools nationwide as part of IBM’s K-to-College technical education program. For 10 years – until his retirement from IBM in 2009 - McCoy worked with teachers and administrators to prepare students for careers in STEM, or science, technology, engineering, and mathematics professions.

McCoy said the decision to focus on outreach work was a personal one and kept him busy talking to students across the country as he visited numerous career days and science fairs.

“I had been doing outreach to schools, trying to represent underrepresented groups in STEM classes,” McCoy said, adding that the initiative was focused on encouraging girls, African-Americans, Hispanics, Native Americans and the disabled, to consider pursuing careers in STEM.

McCoy found the work so personally rewarding, he was only eight days into his retirement when he began getting calls from some of the educational agencies he had worked with as part of the K-to-College initiative, requesting his help to pursue their own STEM-related initiatives.

If he is able to serve as a role model to the students he works with, McCoy said, he considers it a mission accomplished. Growing up in the rural landscape of Elizabeth City, he didn’t see many African-Americans working as engineers. So serving as that role model to young students who are just beginning to decide what they want to be when they grow up, is important to him.

“I’m from Elizabeth City, so you didn’t have a lot of people like that,” McCoy said. “You can stimulate these kids because they think, ‘Oh, he looks like me.’”

Since his retirement, McCoy has supported more than 1,000 K-to-College STEM projects in the U.S. and the Dominican Republic.

When he retired from IBM nearly five years ago, McCoy said he didn’t have plans for a second career in consulting.

“I just wanted to keep having fun inspiring young people and getting them excited about the possibilities of STEM careers,” McCoy said. “But even before I retired, people started contacting me with requests to continue my skills-based volunteering efforts through working with schools, mentoring, serving on advisory boards and judging robotics competitions.”

“Maybe one day I’ll slow down,” he added. “But for now, I’m having too much fun and getting too much satisfaction from serving my community.”

McCoy said his 30-year career in engineering – and the happiness and fulfillment he found there – is all because of his last-minute decision to go to COA nearly four decades ago.

“COA provided me with the fuel to launch a successful collegiate education and technical career that follows me today,” McCoy said. “There’s no way I could have gotten the academic foundation needed, without going to COA.” 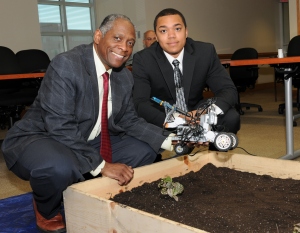