Please let me start off by saying how truly surprised and honored I am for being considered for the Student Excellence Award at Rowan-Cabarrus Community College (RCCC). I have found it difficult processing the thought of being recognized for doing something for which I am honestly having such an enjoyable time. I am what is politely referred to as a non-traditional student and I know I am not the first person to find out in their middle ages that life’s plans have a propensity to change. In the summer of 2010, I found myself starting over again without a set of job skills outside of the commercial fishing industry and needing to find employment.

In the fall of 2010, I enrolled in the six semester Air Conditioning, Heating and Refrigeration (AHR) Associate Degree program at RCCC. I completed the program in December 2011 after only four semesters while carrying a 4.0 GPA and working full-time during the last semester (in an industry related field). I am thankful that the AHR program was structured in such a way that I was required to take core, educational classes. Although it was daunting to step outside my comfort zone and immerse myself in classrooms filled with diverse student populations, I eventually became confident enough to realize that I was accepted for me. My life experiences provided a positive addition to the classroom environment, as well.

During my final semester of my AAS degree, I decided I would like to continue forward with my education and pursue a Bachelor’s Degree in Business Administration. I will admit that one of the original contributing factors in the decision making process was setting a positive example for my son and eliminating the possible excuse of, “You did not go to college Dad so why should I?” I used the term original before because now it is just one of many reasons I look forward to my educational journey; instead of doing it just for my son, I realize I am doing it mostly for me.

There are two things that I do not doubt: 1) I would not have survived the first semester at a four, year educational facility where you are a number and not a name and 2) without the support and encouragement that I have received from both instructors and staff here at RCCC, my position of student would have ended as soon as I finished my AAS degree. I had the privilege of being seated at a table with Dr. Spalding and experienced firsthand that students at RCCC are recognized as individuals, their opinions for improving the learning experience at this college are valued and the attitude of providing a positive service to the community is prevalent from the top down.

Either in the fall of 2013 or spring of 2014 I will be transferring to East Carolina University (ECU) to complete my Bachelor’s degree. While the majority of my courses through ECU are online, I will be required to take some classes at the University of North Carolina Charlotte in a traditional setting. So once again I need to step outside of my comfort zone by attending lectures at a four year institution. I can only hope that my experiences at both these universities will compare closely to those I have had while attending RCCC. 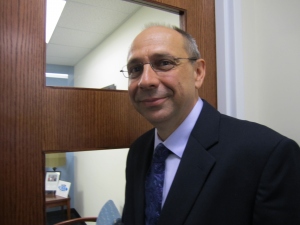