“Ed's leadership, knowledge and commitment have been critical to the success of Completion by Design,” said Randy Parker, president of GTCC. “He is an invaluable resource for not only GTCC but also the entire North Carolina Community College System, which he has impacted through his development and implementation of the Completion by Design model.”

“I am very humbled and honored to be recognized for this award,” Bowling said. “It has been a privilege to work across the system with so many people who are dedicated to improving our processes and programs in order to help our students stay in college and attain their credentials.”

Bowling started out at GTCC in 2005 as a part-time adjunct faculty member in developmental education and later became a full-time instructor, earning a nomination for Excellence in Teaching for four consecutive years and receiving the 2007 Claire Hunter Award for Excellence in Developmental Education. From there he accepted the challenge of directing GTCC's Developmental Education Initiative Grant, where he worked with a wide variety of faculty and staff to improve all aspects of the developmental student's experience. He also played a leadership role in the system's Developmental Education Initiative State Policy Team.
In 2011 GTCC selected Ed Bowling as executive director of Completion by Design, a national, five-year initiative funded by the Bill & Melinda Gates Foundation to increase completion rates among young, low-income students. To launch the project, GTCC collaborated with a cadre of four other North Carolina Community College (Central Piedmont Community College, Davidson County Community College, Martin Community College and Wake Technical Community College). Bowling has led the North Carolina cadre to develop, implement and bring to scale a model that will serve as the standard course to completion for students in North Carolina community colleges. The five-year project involves three phrases: one year of planning, two years of implementation and two years to scale up and adopt the model at participating community colleges.

“From the beginning of Completion by Design, the intent was to eventually scale this work across the system,” Parker said. “Ed has worked closely with senior staff at the System Office to develop an initiative to spread the work of Completion by Design to other community colleges. His work over the past three years has significantly impacted the North Carolina Community College System.”

Furthermore, Bowling works with a number of other national partners, including the Community College Research Center, Jobs for the Future and Public Agenda. He's also frequently invited to make presentations at regional and national conferences. 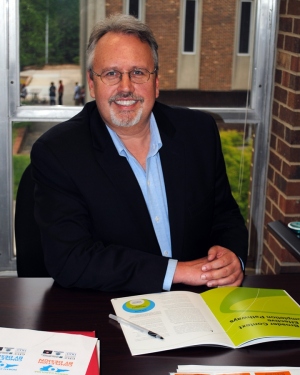