Gavin Taylor, a second-year student studying criminal justice at Rockingham Community College, has been named one of “The Great Within the 58” – an academic excellence award presented to one student at each of North Carolina’s 58 community colleges. Taylor, who holds a 3.892 grade point average, will receive his Associate in Arts degree in May from RCC, and then will transfer to a four-year university to pursue his Bachelor’s degree. “I’m not getting a degree in criminal justice here. I’m only taking the classes that will transfer,” he said. “I don’t know where I’m going to go; it depends on where baseball takes me.” Taylor plays right field on the RCC Eagles baseball team, where he also serves as captain. He is in the Phi Kappa Theta honor society, and works part-time as a server at Uptown Charlie’s, a sports bar/restaurant on N. Church Street in Greensboro.

Taylor is taking 12 credit hours this semester and spends about eight hours per week on his homework, split between Tuesday and Thursday nights. The time he devotes to baseball is pretty much a full-time job – 35 to 40 hours per week, including weekends. “I’m doing baseball stuff by 12 every day, and practice starts at 3 and ends at 5:30,” he said. If there’s a doubleheader, the team’s there from 9 a.m. to 6 p.m. It’s a balancing act for the young athlete.

“You just go to class and do your homework – it’s not hard,” Taylor said. “I try to tell the guys on the team that all the time.”

In fact, his relationship with his teammates has earned him a nickname: Dad. “It’s because I’m always drilling them. I’m always telling them what they need to do, where they need to be, what time practice is, what time games are, what to wear … every time they have a question, they call me,” he said. “I don’t know how (the nickname) started.” Taylor said he’s pursuing criminal justice because his mom was a detective with the Rockingham County Sheriff’s Department. “I want to be a highway patrol officer, but I’m going to probably do my internship with the FBI or the SBI,” he said.

While he hasn’t chosen a university yet, William Peace University is definitely on his list, because its Raleigh location puts him in the area of the State Bureau of Investigation’s headquarters – which provides plenty of internships. He’s delaying his decision to see what universities make him an offer to play baseball. Taylor already attended Wingate University fresh out of Rockingham High School, but a baseball injury brought him back home. He said Wingate was really expensive, and he didn’t want to continue there if he wasn’t playing baseball. After all, Taylor has been batting balls since he was a child. “I’ve been wearing Number 8 … because of Dale Earnhardt Jr. I’ve never worn another number. I was even Number 8 in football in high school,” he said. But it hasn’t always been easy to nab that number. “When I was in seventh grade, the first year I got to play baseball in middle school, one of the eighth-graders had Number 8,” he said. He figured out the other athlete’s interests and made a trade for the coveted number.

Taylor grew up on a horse farm in the Summerfield area of Rockingham County. He’s the only child of Dana and Daryl Taylor. She’s a professional dressage horseback rider and he’s a packaging manager for a German company. “Dad’s the reason I’m good at baseball,” Taylor said. “He throws batting practice to me all the time. We have a batting cage in the back yard.” His earliest memory of playing baseball is playing tee ball and not having to use the tee. He was 4 years old. “I got mad when they made me use a tee. I thought it was for little babies,” he said with a laugh. 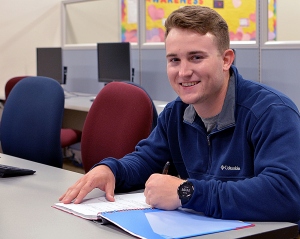