The year 2012 was my year of second chances. I was informed in December 2011 that the company I had worked at for the last thirty-four years was closing and all manufacturing was moving to either Mexico or China. My job would end on March 31st 2012. At first I was shocked and a little scared because at 61 years old you are too young to retire and too old to find another job in the Robeson County area making the same salary you had worked up to for all those years. Before I had time to recover from this shock, I was told in January 2012 that I had stage two progressive breast cancer. I knew I had to make some plans and quickly.

After seeing a surgeon and oncologist, it was decided I would have a radical mastectomy and take three types of very aggressive chemotherapy. More planning was needed, and again quickly. I had learned at this point that the company I worked for would help with education for other careers if we were willing to attend college. For me, this was an answered prayer and the first of my second chances.

I knew I couldn't work and take the chemo but with understanding from my teachers I could prepare for my second career. I also knew it was going to be hard going back to school after all these years. I had taken a few courses over the years but a degree program? What was I thinking? I talked with several local colleges and decided I would go to Robeson Community College because I had heard so many good things about the Culinary Arts program offered there. I started in the fall of 2012, bald as an onion from the treatments and so sick sometimes I thought I wouldn't make it. Chef Locklear, Chef Kowal, and Chef Cummings were all great inspirations to me and never once looked at me funny when I had to wear a bandana to hide my awful bald head. It was wonderful trading that bandana in for a chef's hat.

I have cooked all my life but never to the degree that I have learned from the chefs at Robeson Community College. The degree of their knowledge and expertise is amazing. The other classes needed for this program have been great as well but learning the cooking skills, nutrition, sanitation and other aspects of culinary have been a real eye opener. I never knew chefs had to wash so many dishes, this culinary thing is hard work!

This year will mark another of my second chances. Two years cancer free and hopefully I will graduate in May 2014 and can start a new career. This has been quite a journey but everyone at RCC has made it a one of the greatest chapters of my life. 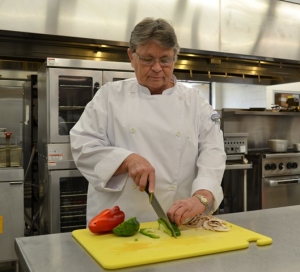