After working in the construction industry for some years, Kit C. Campbell enrolled in the Basic Law Enforcement Training (BLET) program at Beaufort County Community College with the goal of serving as a reserve law enforcement officer.

But while studying for his certification, his construction job ended and an opening developed for a full-time job in the Beaufort County Sheriff’s Office.

“The way it worked out, it was almost like it was meant to be,” Campbell said.

While employed with the sheriff’s office, Campbell continued his studies, earning an associate’s degree in criminal justice from BCCC in 2002 and a bachelor’s degree in criminal justice from Mount Olive College in 2004. He also has certifications in a variety of weaponry from Wilson Technical Community College. Campbell has also earned an Advanced Law Enforcement Certificate issued by the N.C. Sheriffs Education and Training Standards Commission.

In December of 2011, he was promoted to the rank of Chief Deputy in the Beaufort County Sheriff’s Office. As Chief Deputy, Campbell oversees the day-to-day operations of the sheriff’s office and its 86 employees that include some 51 sworn officers.

Campbell also serves as liaison between the sheriff’s office and the Beaufort County Board of Commissioners. He is second in rank only to Sheriff Alan Jordan.

“Chief Deputy Campbell has prepared himself thoroughly for the job,” Jordan said. “He really has the heart of a servant. He enjoys helping folks both in and outside of the sheriff’s department.” 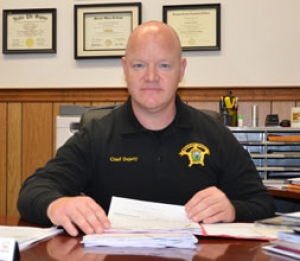