I am a thirty years old and the mother of two boys, ages ten and three. After graduating high school in 2006, college seemed like an unreachable goal. I began working instead of pursuing my passion to be an artist. In 2008, my high school sweetheart and I, had our first child together. However, we did not maintain a happy household.

By the year 2012, I barely made it out of that relationship with my life. My “high school sweetheart” was charged with 1st-degree kidnapping, 1st-degree rape, assault by strangulation, assault with a deadly weapon, and assault with the intent to kill. He is now serving 16-24 years for the last assault I survived on April 7, 2012. For years, I was mentally and physically abused by the man I loved, and I thought loved me. Although, his arrest did not end my pain.

Due to the abuse over the years, I was left with bodily injuries. The strangulation led to me having an MRI done on my neck. During the procedure, doctors found several masses on my thyroid gland. After a biopsy, it was confirmed I had thyroid cancer. On December 21, 2012, I had surgery to remove my entire thyroid gland. January of 2013, I took radiation iodine to kill any residual thyroid cells. This was also the year I began to paint again and started selling my artwork.

Creating art gave me a way to release and express my emotions. Selling artwork alone would not cover living expenses so I maintained my job a warehouse team member at Malt-O-Meal in Asheboro, NC. I worked there for seven years before I decided college was no longer an unreachable goal. In May 2016, at the age of 27, I began my journey as a graphic designer at Randolph Community College. I worked over 12 hours at night and went to school during the day.

Not only was I trying to juggle work and school, but I was also married and had two children. Getting off work at 6 am then driving straight to campus and waiting till 7:30 am for the design center to open. Most days I got out of class at 3 pm and went on to work to keep from falling asleep and missing work. This meant going without sleeping for multiple days per week for months. By December 2017, being so sleep deprived, I was ready to drop out of college despite how happy I was to finally be pursuing my dreams. I had already made the decision to withdraw from school to keep my job when my job fired me.

I was the sole provider for my family. My marriage quickly felt apart. I lost my apartment and had to move in with my father. Losing my job, however, meant I could continue my commitment to graduating with an associate in advertising and graphic design. Despite every obstacle, I worked towards my goal, the same goal I had always thought I could never achieve.

I will be graduating in May 2019. I had never made straight A’s before college. I never felt like I belonged anywhere before joining the design program. My fellow classmates and instructors have become like family to me. I have finally found the support I longed for and inspiration I needed within Randolph Community College. I now see that the unreachable is within grasp. Dreams can be a reality with hard work and determination. 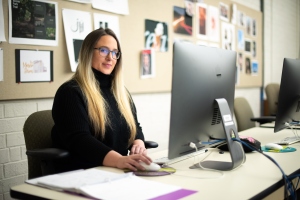