After 18 years of working in the airline industry, Margaret Raynor decided to retire in 2005. She tried several different jobs over the next six years, but she still wasn't fully satisfied.

“One day my husband and I were sitting around talking, and he suggested I go back to school and pursue a career in the medical field,” Raynor recalled. “At first, I didn't think that was a good idea, because of my age. I was thinking someone my age would have a hard time focusing, concentrating on school work, and just retaining the material.”

But after a few months of consideration, Raynor enrolled at Johnston Community College in January 2011.

“I was very nervous in the beginning,” Raynor said. “Going back to school after so many years was very scary for me, but I was determined to overcome that fear very quickly. Faculty, staff, and my fellow students were so supportive and helpful.” 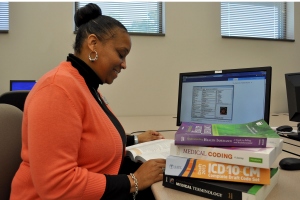