First, please allow me to begin by saying that I am a high school dropout.  I start with this information because it is an event that has set the tone for most of my adult life. In March of 2004, three years before my high school graduation, I decided to discontinue school.

I was still unsure of my abilities so I decided to choose what I thought would be the least difficult path, rather than pursuing what I really wanted to do. I chose to major in Medical Office Administration instead of applying for the nursing program simply because I did not feel as though I was intelligent enough to enter the nursing program at RCC, or any other college for that matter. On top of that, being a single mother of one small child, I needed to partake of something that I would be able to balance with the responsibilities of motherhood.

Once I got into the courses and was exposed to the assignments and realized that I was capable of doing the work, I began to become more and more confident. I completed my first semester with all A’s, which further edified my inner belief in myself.  Then, with each passing semester, I receive further confirmation that I was not incapable of accomplishing the goal of earning a degree.

The growth of the belief in me in concordance with the encouragement and urgings of my instructors helped to catapult me in the direction of success. Consequently, an incredibly great deal of the reason that I have experienced success at RCC is on the behalf of my instructors. Not only did they allot me the tools that I needed to be successful in their courses, they lent my heart the words of encouragement that I needed in order to succeed in life. Sometimes it was their faith that carried me when I was unable to draw upon my own.

Now, thanks to incredible instructors like Mr. Clark Adams, Mrs. Tracie Burnette and Mrs. Amy Brantley, I have decided to begin working on the prerequisites to enter into the nursing program. Overall, I would say that the moral that I have taken away from this experience is: “It is not how you start, rather, it is how you finish.” 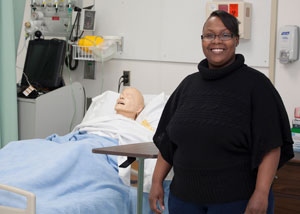