Ann Treadway has a priceless selfie she took on the first day of her physics class at College of The Albemarle.

Her smiling face is in the foreground, and just behind her seated a few seats back, is the mortified expression of her then 17-year-old son Andrew Treadway, a high school senior at J.P. Knapp Early College High School. The two unknowingly had been placed in the same physics class at the last minute.

“We only ended up in one class together,” said Ann Treadway, referring to their two years on campus together. The mother-son duo will earn their associate’s degrees during COA’s May graduation ceremony. “It was really funny. The very first day of classes, he walked in and 20 minutes later, I walked in and sat down. His face was priceless.”

As the instructor called roll and realized there were two Treadways in the class, he asked the pair if they were related. Although her son is a ringer for her, Ann Treadway quickly spoke up and said no, they were not related.

Andrew appreciated his mom trying to save him the embarrassment of being in the same class as his mom, but being students together never bothered him. In fact, graduating with his mom in May is something he is very proud of.

“Everybody says it’s not about the destination, it’s about the journey,” said Andrew, who graduated with his Associate’s in General Education. “In that she was able to be a part of that, it made the destination more special.”

Ann Treadway graduated from COA with her Associate’s of Science degree, Business Administration, and this fall she begins her second semester as a student at East Carolina University where she is pursuing her Bachelor’s Degree in Science with a concentration in business education. She hopes to put her many years as a business owner to good use as a business instructor after she graduates. She sold her shipping business when she decided to go back to school in the fall of 2012.

“They inspired me to go back and to know that I could do this,” Ann Treadway said, referring to Andrew and her daughter Julia, who also graduates from high school in June.

Laura Morrison, department chair of English and Communications at COA, taught the mother and son separately in her public speaking course. Andrew took the course first and the following semester, Ann Treadway signed up for the class.

Both of them had strong organization skills in their speaking and were good public speakers, Morrison said, but she never put two and two together until Ann Treadway told her they were mother and son.

“After she told me, I thought, ‘Oh yeah. I get it,’” Morrison said. “I remember his mom asking me where her son got his speaking ability – whether it was from her or the dad.”

Although both Treadways were good students, Morrison said, they had their differences too.

“I just remember Ann is a very driven and competitive person,” Morrison said. “And Andrew is so laid back.”

Ann Treadway admits that while she had to hit the books pretty hard during her two years at COA, good grades seemed to come much more easily to her son.

“In my mind, he’s brilliant,” Ann Treadway said adding that if there was something she wasn’t clear on in class, she would sometimes ask her son about it later. “He doesn’t have to study.”

Likewise, the younger Treadway said his mom helped him along the way as well.

“We leaned on each other to get it done,” said Andrew Treadway, who earned his Associate’s in General Education from COA. He just finished his first semester at Virginia Wesleyan College in Norfolk, where he is working on his Bachelor’s in Business with a minor in history. He “She taught me new things and I’m sure I taught her things too. We kind of helped each other out in that way.”

“We are very much alike,” he added. “I mimic my mom’s personality.”

As for being embarrassed to have his mom in his classes and pursuing a college degree  at the same time he was, Andrew Treadway said the thought never entered his mind. 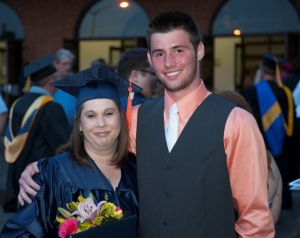