Each of the 58 NC community colleges nominates a student for the award each year, and Jumoke, who graduated from CFCC in 2013 was selected as the state's top choice.

The Dallas Herring Achievement Award was established by the North Carolina Community College System in 2010 to honor the late Dr. Dallas Herring, one of the state's earliest advocates of community colleges. The award is bestowed annually upon a current or former student who best embodies Dr. Herring's philosophy of "taking people where they are and carrying them as far as they can go."

Jumoke embodies the spirit of Dr. Herring's philosophy. After dropping out of school in the seventh grade and overcoming a troubled youth, Jumoke began to turn his life around. In 2011, he earned his GED. Determined to continue to his education, Jumoke then became the first member of his family to earn a college degree.

“The college helped me in tap into my own potential as not only an academic achiever but also as a leader. There are so many examples of the great things this school has done for my personal and professional confidence,” Jumoke said.

As a student at CFCC, Jumoke not only excelled academically, but became a role model for his fellow students. When he graduated last year, Jumoke was the Student Government Association president, was an active member of CFCC's Male Minority Mentoring Program, served on the CFCC Board of Trustees, represented the college at the state level and volunteered for a number of organizations in the local community, including the New Hanover County Blue Ribbon Commission to Prevent Youth Violence.

Jumoke is not finished quite yet. He recently transferred to UNCW and is on his way to earning a bachelor’s degree. 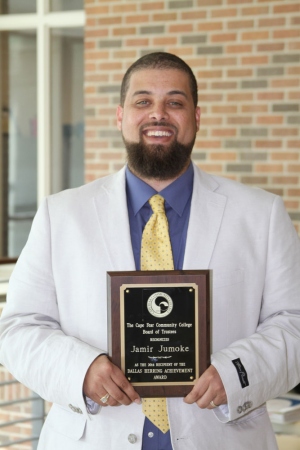