Raeca Mary Igno has overcome language and cultural barriers to succeed at getting an education at James Sprunt Community College. Originally from the Phillipines, Reaca followed her parents to the United States in June 2008.

After graduating from high school in the Phillipines, Raeca began working toward her Bachelor of Science Degree in Nursing. Unfortunately her credits would not transfer when she moved to the United States, but rather than be defeated, she began her education all over again at JSCC.

While a student at JSCC, Raeca has been named to Who’s Who Among Students in America’s Universities and Colleges, on the President’s List for three consecutive semesters, and on the Dean’s List for one semester. Raeca is also a tutor teaching math and computer classes. 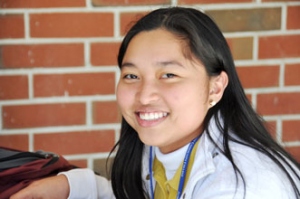