As an entrepreneur breaking into an unconventional industry, Shane Cooper has stopped nothing short of putting the pedal to the metal – literally.

In 1992, sparked by an obsession with cycling, Cooper founded and became CEO of DeFeet International Inc., a leading manufacturing company of cycling socks and accessories based in Hildebran, N.C.

Attributing his success to the bicycle and a bit of fate, Cooper revolutionized the cycling sock with the creation of the first customizable airflow, weave design sock – a feat that has allowed DeFeet to expand products into 34 international countries and catch the attention of famous customers like Lance Armstrong, Greg LeMond and George W. Bush.

These accomplishments contributed to DeFeet’s prestigious awards, including the 2011 N.C. Small Business of the Year and the President’s 2012 “E” Award.  The “E” Award, which honors U.S. businesses responsible for increasing exports, recognized that 25 percent of DeFeet’s revenue comes from selling products overseas.

But despite his success, Cooper acknowledges DeFeet suffered speed bumps along the way – including a flood, a $250,000 theft and a fire that torched the entire business.

“We had tough years and we had our heads down for a while, but when we finally looked up all these years later, it was amazing to be recognized by this great nation for all of the effort we put into it,” Cooper said.

In addition to his determination – a quality Cooper said he has gained throughout his ongoing fight with dyslexia – Cooper credits his success to Catawba Valley Community College, where he graduated in 1989 with an AAS degree in Electronics Engineering Technology.

“Catawba Valley was absolutely important to the foundation of DeFeet,” Cooper said. “Without my degree, the process of founding my company would have been slowed because I couldn’t have been as hands on at the top level.”

“Catawba Valley gives everyone an equal opportunity to get the education they need,” he said. “You can work it into your budget, your calendar and your life – it works for everyone.” 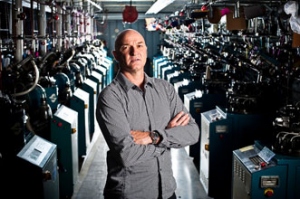