I am a second-year student at Roanoke-Chowan Community College with plans to graduate in May 2016 with an Associate Degree in Business Administration. in 1976, I attended Roanoke-Chowan Technical Institute majoring in Executive Secretarial Science. I was an honor student and was elected Miss RCTI. in my second year, I was offered a job as a private secretary and was faced with the dilemma of completing my degree or entering the world of work. I took the position with the intention of completing my degree at night. However, being a single mom of two, I could not find the time to complete my degree.

Since 1976, I have worked as a secretary, a manager of a convenient store, a police officer, and a correctional officer. I was an EMT with the Rescue Squad, a firefighter with the Fire Department, a sergeant with the National Guard, and held the positions of instructor, mentor and assistant unit manager with the Department of Corrections.

Now, after thirty plus years, I have returned to Roanoke-Chowan Community College, majoring in Business Administration. Upon returning to R-CCC, I realized a lot had changed since 1976. However, the return to R-CCC has been pampered by the assistance provided to me by the caring staff and instructors who put the student's best interests first.

Since my return to R-CCC in 2013, I have still had many obstacles to overcome. While being a full-time student and unemployed, I have been faced with the casualties of a divorce, left with financial debt and a mortgage payment. In spite of my circumstances, I am able to see my obstacles as stepping stones and my experiences at R-CCC have been very rewarding. Beyond graduation in May 2016, I intend to transfer to Elizabeth City State University to obtain a BS degree. It is a joy to now see the light at the end of the tunnel and to know that my determination to earn a degree will become a reality. 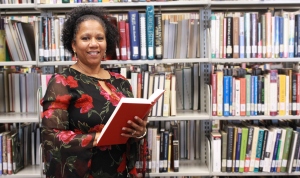