A 32-year-old, single dad is the top student at Carteret Community College for 2013.

Thomas Stroud, a student enrolled in the college’s Computer Information Technology program, has been chosen as the top curriculum student for the year based on his 3.86 grade point average, and having completed 57 hours toward graduation.

“This has been a great experience,” said Mr. Stroud.  “After graduation, I plan to transfer to East Carolina University, where I will continue working on a Bachelor of Science in Information Technology.

“I was born right across the street at Carteret General Hospital, and spent most of my childhood in Carteret and Craven counties,” he said.  “I graduated from Havelock High School in 1998.”

“Thomas is very deserving of this award,” said Tom Edwards, Information Systems Technology Instructor.  “He is the college’s Computer Club President, and it was his leadership that initially brought the club together, got it organized and pointed in the correct direction.  His style allows other students to hone and maximize their skills while still guiding them.  Most impressive are his maturity, technical skills, personality, and intelligence that make him an example for other students to emulate.”

At first, Mr. Stroud was unsure about what he wanted to do when he returned to school.

“I had a lot of doubts and uncertainties, but I devoted 110 percent to my education,” said Mr. Stroud.  “Since then, many doors have opened for me, and they continue to open.  I've learned a lot since I started at CCC, but I feel the single most important thing is that it's never too late to change your life.  I never dreamed I'd be where I am today when I first walked through the doors here, but I'm proud of my accomplishments and can't wait to go even further. I just hope that I can inspire others to believe in themselves, to abandon doubt, and to make this same commitment to their future.”

For Mr. Stroud, attending college has produced other positive results close to home.

“My 13-year-old son, Tommy, has been watching me and my successes at the college like being inducted into the Phi Theta Kappa National Honor Society,” said Mr. Stroud.  “Now his grades are better than mine, and he was just inducted into the National Junior Honor Society just about the same time.  He has been a source of inspiration to me, particularly when I needed a little extra push.”

“My long-range plan is to pursue a Master of Science degree in Information Technology with a focus on Information Security,” said Mr. Stroud.  “I am leaning heavily towards becoming an offensive information security specialist, though I am pretty fascinated by the field of digital forensics as well.”

Mr. Stroud also works part time at the college helping with information technology projects.  He is scheduled to graduate from CCC in May, and as the academic excellence winner for the college, he also will represent the college at a statewide meeting of other top academic achievers from other community colleges during the spring. 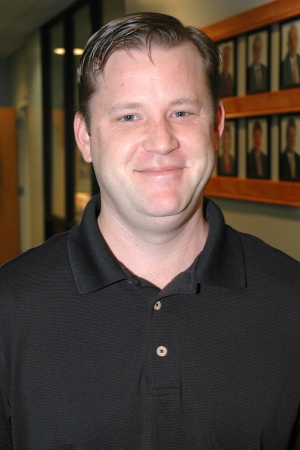