Wyatt creates opportunities for him self by focusing on his future career goals and working diligently in the classroom. He is not only a student at MCC but is also a senior at Mayland Early College High School. Wyatt will fulfill the requirements for his high school diploma and two-year Associates Degree in four years instead of the usual five anticipated for MECHS students.

“I feel like I am prepared to attend a four year university after attending classes at Mayland,” said Wyatt. “It's all in there in the name with Mayland because it is a community. You get to know people. Mayland is a great opportunity for students.”

Following a rigorous curriculum of honors high school and college classes, he is currently ranked first in his MECHS classes. Wyatt is the founder and current president of the MECHS Student Government. He is also a member of the Senior Beta club, as well as Phi Theta Kappa, and is active in the high so Drama Club. Wyatt plans to attend UNC-Chapel Hill, majoring in Pre-Medicine with the goal of becoming a physician.

Wyatt resides in Yancey County with his mother, father and two sisters. Wyatt's mother and sisters are also students at Mayland Community College. 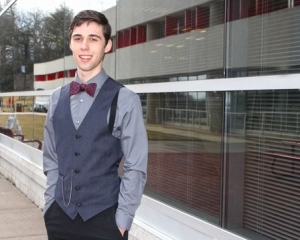