Aquaculture student Todd Gill, 30, has maintained a 4.0 grade point average while taking more than 24 hours of Aquaculture, Biology and other science courses at the college. This semester, Mr. Gill is taking 20 hours of science related courses.

Mr. Gill came to CCC from his home in Cary after learning about CCC’s innovative applied marine science program.

“I love fish,” Mr. Gill said.  “This is a rare opportunity I couldn’t pass up.  For years, I have been interested in aquarium husbandry for a majority of my life and want to start a new career within the aquaculture, public aquarium, or ornamental fish industry.  After making the tough decision to close my custom furniture business in 2009, I decided that it would be an opportune time to continue my education. I chose to attend CCC because the college offers an aquaculture technology program that interests me and the college provides a quality education at an affordable price. As a previous graduate from a large state university, I have had some of the best professors here at CCC.”

Mr. Gill already holds a Bachelor of Fine Arts Degree from East Carolina University, where he graduated in 2005 with a degree in Wood Design.

As the 2012 Academic Excellence winner for Carteret Community College, Mr. Gill will represent the college in Raleigh at a meeting of the state’s top community college students in April.

In addition to his academics, Mr. Gill has volunteered about 100 hours at the North Carolina Aquarium at Pine Knolls Shores.

“Todd has worked his way up from the junior jobs all the way to the coveted husbandry department,” said Skip Kemp, coordinator of the Aquaculture program at the college. “He assists curators with keeping the tanks clean and the fish healthy.”

Mr. Gill also has been working part-time at an ornamental fish supply store in Garner, and commutes on weekends so he can work.

“I am able to balance school, work, and volunteering through personal sacrifice and dedication,” said Mr. Gill.

Additionally, Mr. Gill is conducting an independently designed research experiment.  He is attempting to isolate species of phytoplankton from Bogue Sound, which are used as a food source in hatcheries for larval mollusks and to feed the first foods for larval fish.

“We are proud of Todd, and all he has accomplished,” Mr. Kemp said.  “He certainly will get a good recommendation from me.” 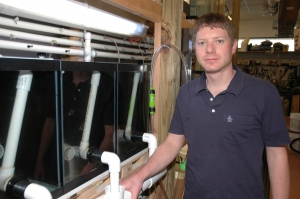