Tyler Drew was initially drawn to Southeastern Community College by the opportunity to play on the College’s intercollegiate baseball team, but he had misconceptions about the academic rigor of community-college classes.

“I’ve got to admit, I was wrong,” he said. “Experiencing the community college life, I understand there are some challenging courses here. They’ve challenged me, and I’ve got to say that I’m a changed person because of it.”

Drew says biology and higher-level mathematics classes like calculus and pre-calculus have challenged him the most. And while being tested in the classroom, he was also overcoming obstacles on the baseball diamond.

After losing their first seven games in 2011, the SCC Rams turned the season around and advanced to the National Junior College Athletic Association World Series for the first time in the College’s history – an experience Drew and his teammates will never forget.

With baseball in his blood, Drew is not willing to leave athletics behind when he graduates from SCC. After earning a degree in physical education from SCC, he hopes to transfer to UNC-Chapel Hill and become a physical therapist.

“I think that by working in physical therapy I can still be involved in sports and help athletes recover and get back on the road to their goals.” 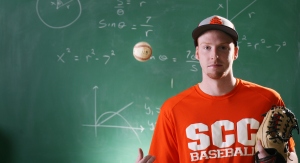