Mr. Willie Corbett, a survivor of a motorcycle accident, a victim of quadriplegic paralysis, a conscious and thoughtful parent aiming to teach his children and grandchildren the value of education, is worthy of the Dallas Herring Award for 2016. Dallas Herring saw in the community colleges a means to “take people where they are and carry them as far as they can go.” However, Mr. Corbett saw in the community colleges, and in Bladen Community College in particular, a means to teach his children and later his grandchildren that education can help them and others overcome any obstacles and can make them stronger and more determined citizens.

On February 3, 1991, Willie Corbett was in a motorcycle accident that left him with quadriplegic paralysis from the chest down. However, eight months later, he was determined not to allow his condition to hold him back, and thus, he started to work on accomplishing his goals.

He got married, had three children and then decided to seek a GED as a means to teach his children the value of education and to be the role model that they could follow as they grew up. Since he had no transportation, he got the GED book, studied the course while his children were at school, and passed the test on his first attempt.

In the fall of 2011, when grandchildren came along, he wanted them to be proud of him; as a result, he enrolled in the computer information technology program at Bladen Community College. The first couple of semesters were the toughest. Having no use of his hands, he had to rely on a mouth-stick especially designed for quadriplegics. A six-page term paper would take him three days to type using only his mouth and tapping one key at a time for eight hours each day, taking short breaks for snacks. The second year, Mr. Corbett was presented with a new laptop through vocational rehabilitation.  In addition, Bladen Community College found the funds to purchase him the software and hardware that allowed him to operate his cursor by moving his head, and he was able to click and use the keyboard by pressing buttons with his shoulders.   Despite the fact that he was diagnosed with several medical conditions that required hospitalization for days and weeks at a time, he never fell behind on his work and graduated in May 2015 with a G.P.A. of 3.29.

After receiving his Associate Degree in Computer Information Technology from Bladen Community College, he was offered a job with a well renowned company. Mr. Corbett’s job will allow him to work from his home through his telephone and computer. He is currently being hospitalized periodically for complications that come with his being bound in his bed and wheelchair and is waiting to be released to begin employment.

Mr. Corbett is forever appreciative for the support he received from faculty and counselors at Bladen Community College, without which his determination to learn and defeat all obstacles may have faltered. 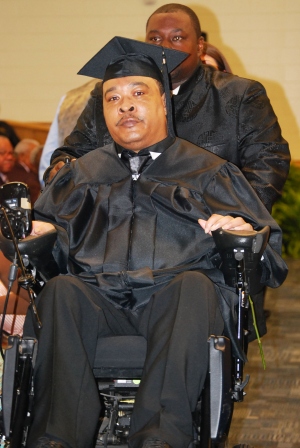